What to do if your Therapist has been Inappropriate 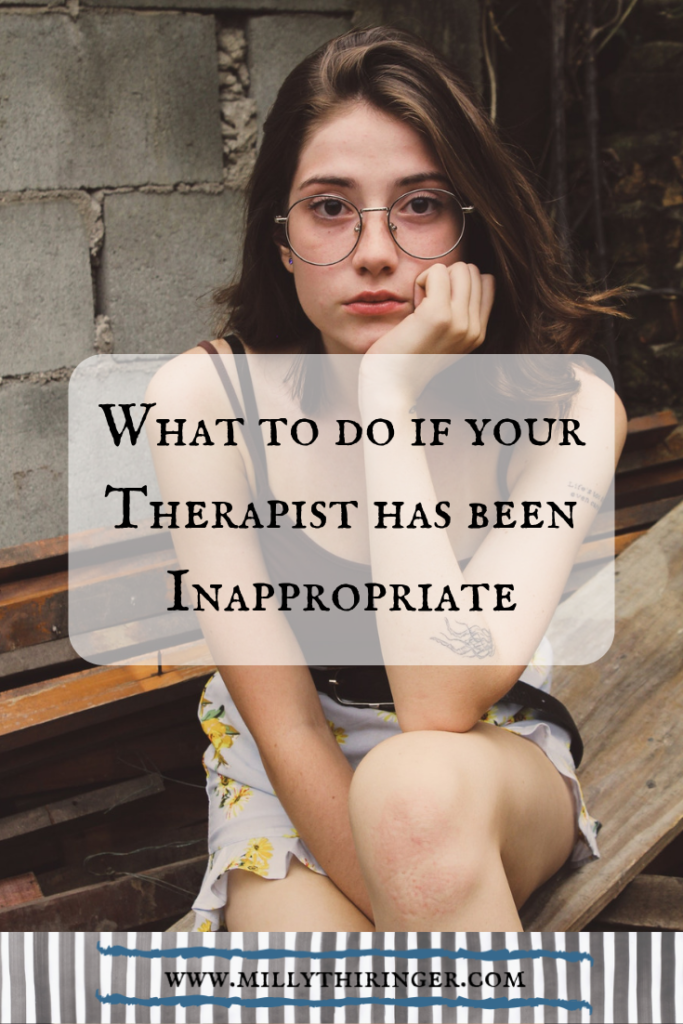 I’ve suffered verbal abuse and sexual harassment at the hands of two different mental health professionals. I’ll talk about the second instance for a moment.

Many years ago, I went to a walk-in crisis center after having overdosed on my medication. The screener who was supposed to be taking my information and seeing how he could help me decided to ask me a whole lot of inappropriate questions and punctuate the dialogue with trying to feel me up. We were the only ones in the office. Nobody else saw it happen. The interview ended when I told him that I had overdosed and he called for an ER transport. I never saw him again.

A couple weeks later, I told my regular therapist what happened. Her immediate reaction was to tell me that I should report it. File a complaint. I said, nobody would believe me. I’m the crazy girl. Why should I bother? This is what she told me:

In Oregon, there is a two-strike rule for sexual harassment in the public health system. If I was the first person to report this individual’s misconduct, he would keep his job, but the complaint would go in his permanent file. If he receives a second complaint, not only will he lose his job, but also his license to practice in Oregon. The reason for needing two strikes is that sometimes, unfortunately, people do make false claims.

So I filed a complaint, and he denied his actions. Of course. But I felt like I’d done something. Now, if anyone else reports misconduct, he will be fired and lose his license. If my report got him to keep his hands where they belong, so much the better. I still don’t think he should be in a position that often interacts with vulnerable women, but either way, if he stopped his behavior or if he didn’t, good has come of my reporting it.

I can only imagine that most states and organizations that deal with people with mental illnesses have rules in place to keep this kind of behavior in check. If you have experienced harassment from a mental health professional, report it. If you don’t know who to report it to, ask the receptionist at the office how to file a complaint. They probably have a paper you can fill out. Most places take these things very seriously if you go through the legwork to report the event on paper.

I shouldn’t have to say this, but just in case you don’t know, there is NEVER a scenario in which a mental health professional touching you inappropriately is a) okay or b) your fault. I don’t care how short your skirt was. So please, please file a complaint. You are helping the next woman he grabs.

Share this with your friends. Somebody doesn’t know they have a right to complain.